The Health Benefits of Cold Exposure

The capacity for human beings to adapt and survive in vastly different climates is remarkable. Take the Afar people of Dallol, Ethiopia, who experience highs of 49°C, compared with the Sakha people of the Yakut tribe in Siberia, where temperatures can drop below -67°C! Now, we’re not suggesting that you book the next flight to Siberia and run around naked, but these examples demonstrate the robust and enduring capacity of the human body.

During the winter months, us moderns just want to stay indoors, crank up the heating and wrap up warm, but despite this seemingly natural tendency, the use of cold exposure as a therapeutic agent has been of medical interest since as far back as 3,500bc.

More recently, there has been a lot of interest, and some preliminary scientific research, into the health benefits of repeated cold exposure. Today we will be summarising the potential mechanisms behind these benefits. Then (if you would like to dip your toe in the cold water so to speak) we will be providing step-by-step guidance on how to leverage this practice in everyday life. 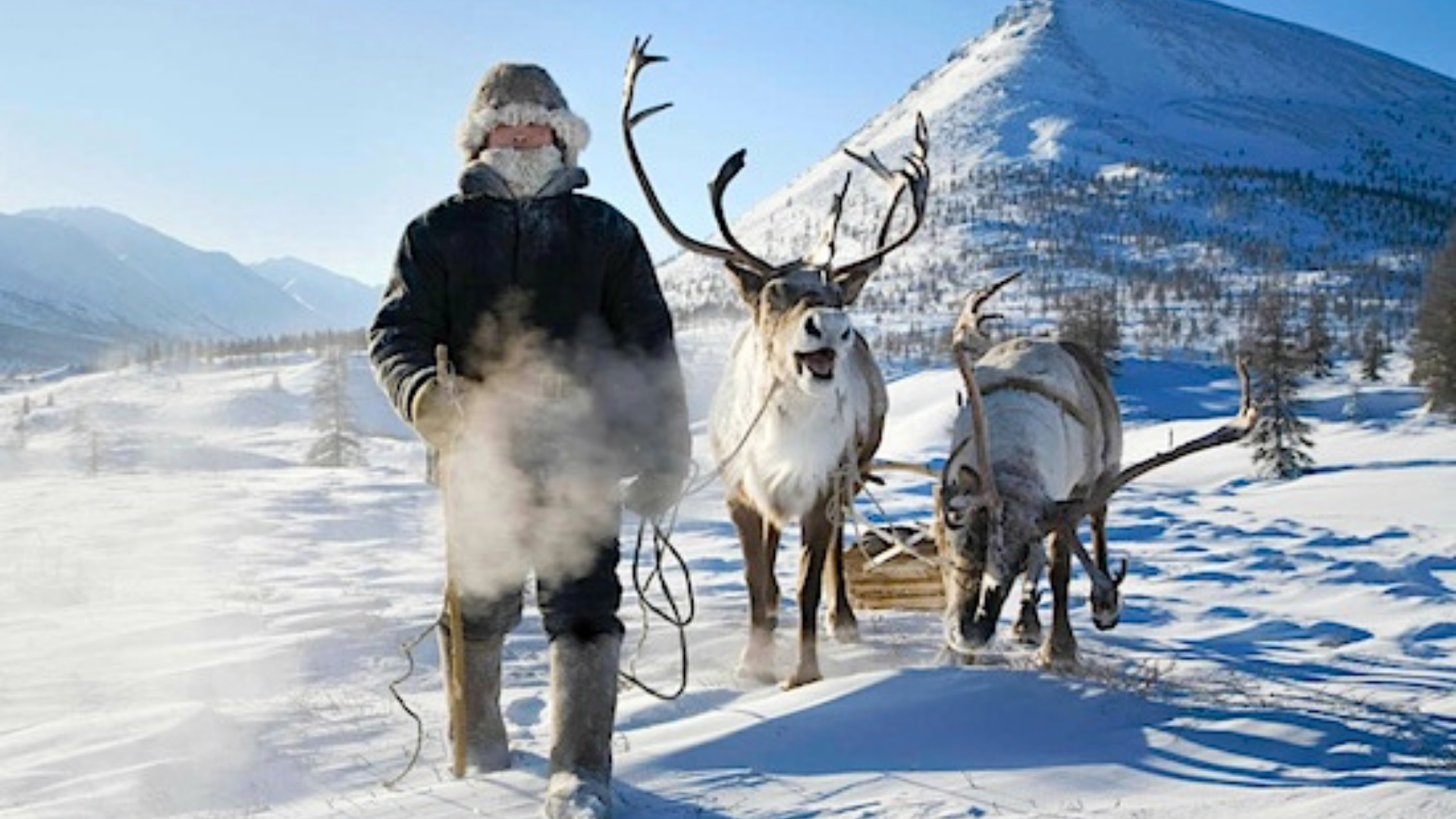 Cold as a Stress

Responding to changes in ambient temperature is one of the most well preserved biological adaptations on earth. It’s so old that even single-celled organisms, like bacteria, retain this capacity. Cold-induced hypothermia is acute stress that our bodies are predisposed to deal with. Similar to exercise, repeated bouts of acute stress can cause beneficial long-term adaptations, which improve the body’s ability to recover from stress in the future. Too much stress can cause damage, but not enough stress weakens. When this “dose-response” relationship is favourable, we enter a state of eustress (beneficial stress). The question is, therefore, if we can reach this state of eustress using cold exposure, can we unlock a world of previously untapped health benefits?

The Cold Shock Response is an umbrella term for all the physiological responses that occur when the body is exposed to a sudden drop in temperature (usually defined as <15℃). The experience of rapid immersion into cold water, for example, will induce a variety of immediate physiological responses, all of which are controlled through the sympathetic part of the autonomic nervous system and includes:

It’s important to note that it is dangerous to experience an unexpected and rapid drop in ambient temperature. Repeated, controlled and voluntary exposure to the cold enables relatively quick and significant habituation, which can radically reduce the severity of the cold shock response. 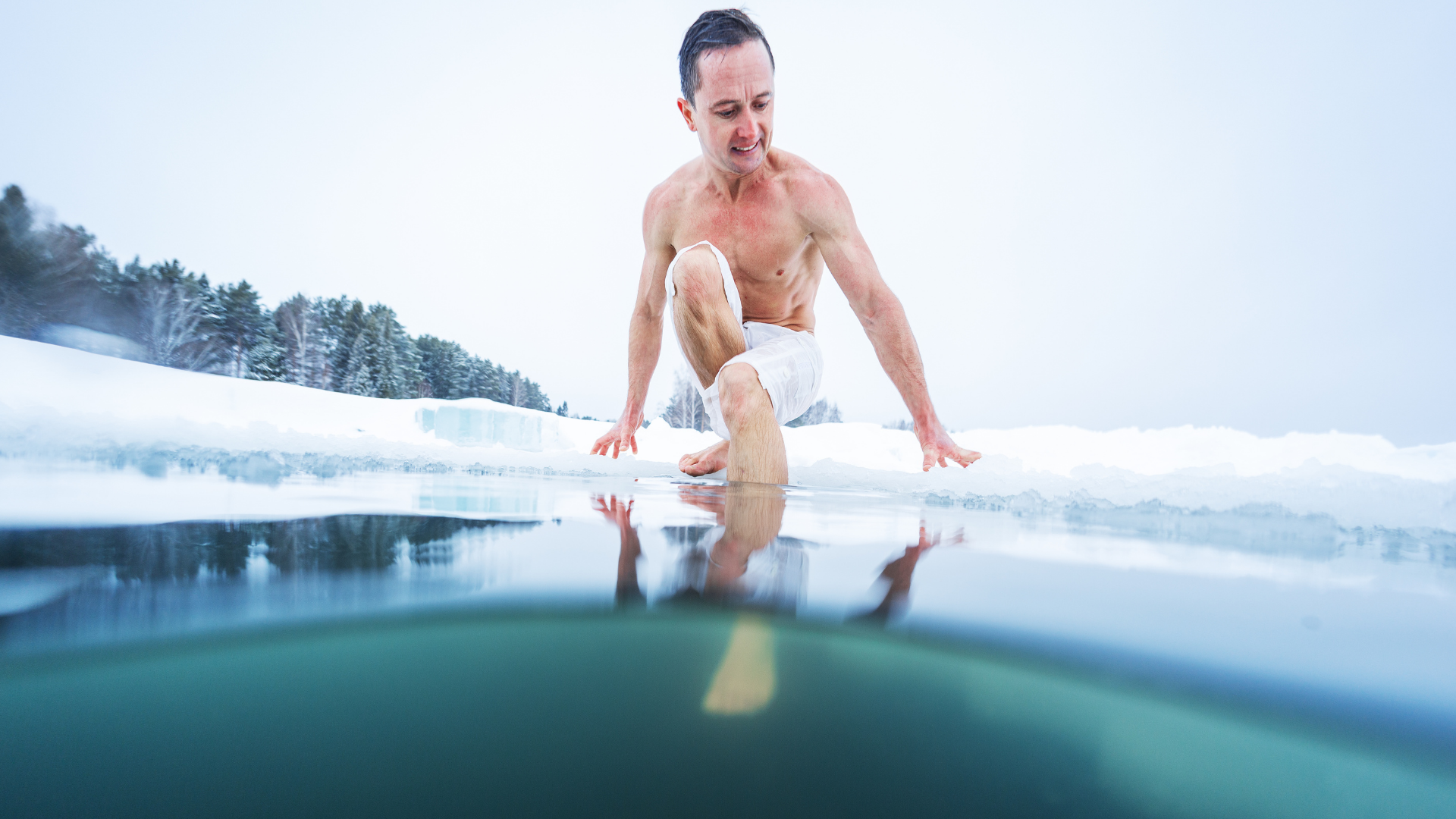 You may have heard of these before, but cold shock proteins are becoming useful markers when trying to understand how cold exposure can affect our health on a cellular level. When our cells detect a drop in temperature they release specific RNA binding proteins (notably RMB3 and CIRP) which initiate a cascade of reactions to protect the cell from damage. The detection of these proteins and their activation can help us further understand the underlying mechanisms between cold exposure and beneficial health outcomes, which we’ll outline later.

We can’t talk about cold exposure, without at least mentioning the pioneer of this field, Wim Hof. He is constantly defying what we think we know about the body’s ability to handle extreme stress. He holds multiple world records, including running a half-marathon in the Arctic Circle, wearing a pair of shorts… and nothing else! After years of deep practice, he has created the Wim Hof Method as a way of training the mind and body to withstand such feats using breathing techniques and progressive exposure to cold environments. His methods have also been shown to influence the autonomic nervous system and parts of the brain which were not thought to be consciously accessible. 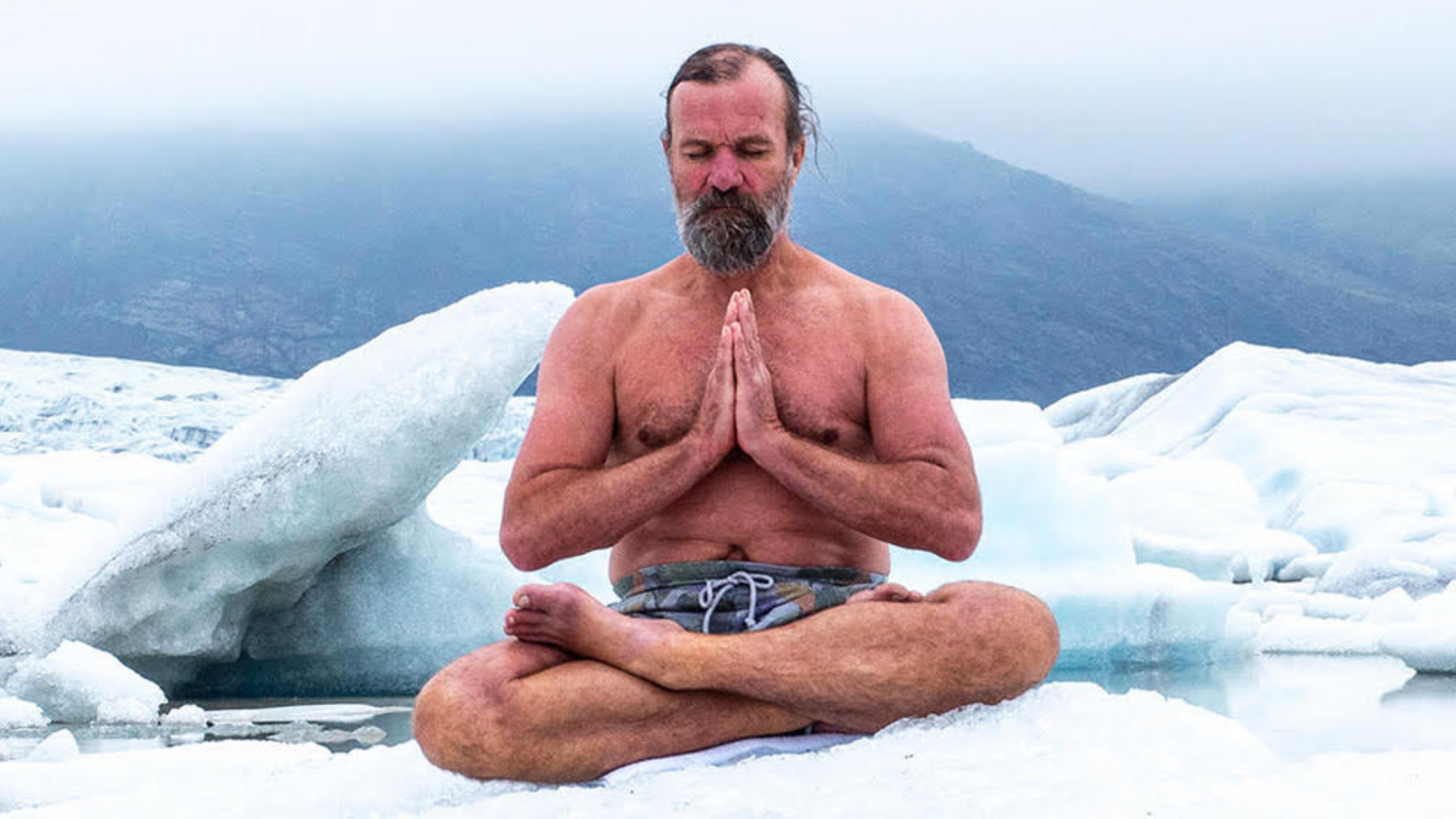 The Benefits of Cold Exposure:

This is a contentious topic. The ice part of R.I.C.E (rest, ice, compression and elevation) as an effective strategy for recovery from injury or training has come under scrutiny. The acronym was originally coined by Dr Gabe Mirkin in “The Sports Medicine Book” (1978). Gary Reinhl, the author of “Iced”, puts forward a strong argument against the use of ice as an aid for injury and recovery. This view is now becoming popular amongst physiotherapists and experts in the subject such as Kelly Starrett and Dr Rhonda Perciaville Patrick.

Inflammation is part of the acute healing process. The anti-inflammatory and analgesic properties of ice (once thought to be beneficial) may slow down the recovery process, as opposed to speeding it up. Even Dr. Mirkin himself has changed his opinion on the subject, writing on his website:

“Inflammatory cells rush to injured tissue to start the healing process (Journal of American Academy of Orthopedic Surgeons, Vol 7, No 5, 1999). The inflammatory cells called macrophages release a hormone called Insulin-like growth Factor (IGF-1) into the damaged tissues, which helps muscles and other injured parts to heal. However, applying ice to reduce swelling actually delays healing by preventing the body from releasing IGF-1”

However, Dr Patrick takes this one step further:

“The purpose of inflammation is to eliminate the initial cause of cell injury, clear out dead cells and tissues damaged from the original insult and the inflammatory process, and to initiate tissue repair. However, when this process runs awry, in the absence of actual biological threat, we’re in trouble.”

Chronic and systemic inflammation is a cause for concern, which can be to blame for a large array of illnesses, pain and disease. Like most things in biology, it’s all about balance. We don’t want to stop inflammation from occurring altogether, especially in the acute stages of recovery, but if it becomes a chronic issue, health may start to suffer. Regular bouts of controlled cold exposure, therefore, may be a tool we can use to optimise recovery, improve adaptations to specific stresses and reduce the risk of inflammatory-related diseases.

One of the most consistent findings when it comes to cold exposure is an immediate boost in energy, vitality, positive mood, clarity and focus. A recent study has demonstrated that cold showers significantly increase endorphins and adrenaline in the blood and increase the synaptic release of adrenaline in the brain as well! It has been suggested, therefore, that cold showers may be used as a treatment for depression.

In preliminary research conducted on rats, cold exposure has been shown to “improve glucose tolerance and stimulate glucose uptake in peripheral tissues”, therefore aiding to regulate blood sugar levels. With the prevalence and rate of type II diabetes on the rise, cold exposure may be an effective preventative strategy to combat this trend.

Some studies have demonstrated that cold exposure can act as a potent immunostimulant, especially in conjunction with pre-treatment exercise, possibly due to increased rates of circulating norepinephrine. It has also been shown, for example, that cold water swimmers retain healthier levels of white blood cells in the blood system, which are crucial in the immune system’s ability to fight disease.

The cold increases blood pressure, respiration and heart rate, similar to exercise. Exposure to bouts of cold can help circulate the blood around the body and forces the cardiovascular system to effectively pump blood and oxygen to the muscles. A well trained cardiovascular system enables the body to deal with stress better and reduces the risk of cardiovascular disease development.

When the body is exposed to the cold, it begins to generate heat by increasing its metabolic rate. This is known as Cold-Induced Thermogenesis! Although the magnitude of this effect varies widely between people, brief bouts of cold exposure may help accelerate weight loss (particularly from brown adipose tissue) by increasing overall energy expenditure.

This is where our cold shock protein friend RMB3 comes into play. Mice studies have demonstrated that early exposure to cold temperatures helps protect against neurodegenerative diseases such as Alzheimer’s and stroke, due to the protective properties of RMB3 on brain synapses. It has therefore been suggested that cold exposure could be used as a promising protective target for therapy for neurodegenerative diseases, although the science is extremely new.

Our circadian rhythms use light and temperature to stay regulated. Exposing ourselves to natural changes in temperature, including the cold, can help regulate your sleeping patterns. This is the reason it’s recommended that we sleep in cool environments (as we’ve mentioned in sleep part 2).

This one is somewhat anecdotal but psychologically important nonetheless. Setting yourself a challenge like this, overcoming discomfort and learning to control your body’s response under perceived threat can be powerfully rewarding and fulfilling. Not only does your will power improve but you also get a feeling of achievement and accomplishment. 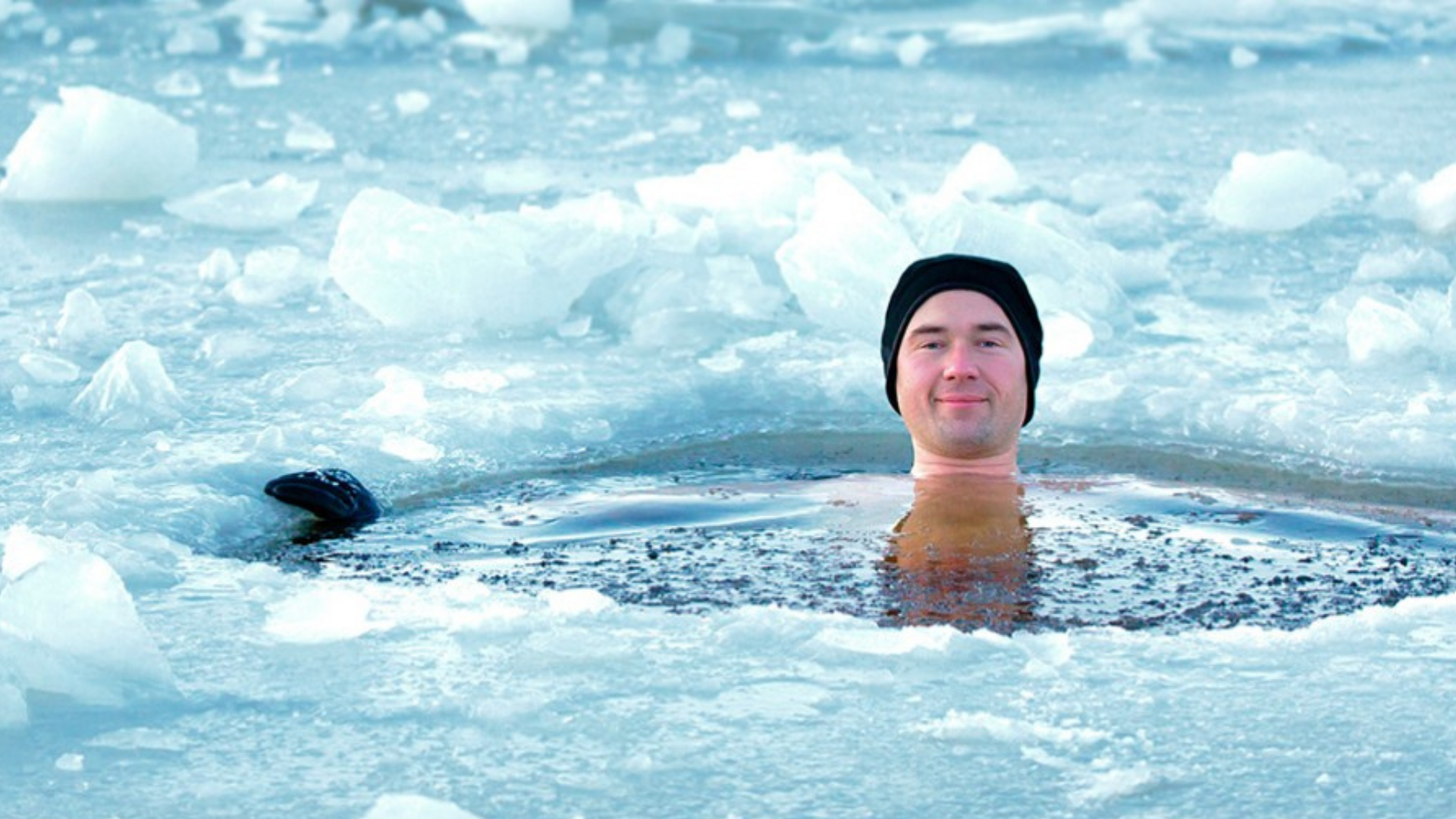 Caution: Rapid and prolonged exposure to cold environments can be dangerous due to the body’s Cold Shock Response, which can induce a stroke or heart attack. Please take necessary precautions, such as consulting your GP if you decide to make any major changes to your diet and lifestyle.

At the end of your daily morning shower, gradually turn the taps to cold until the temperature becomes tolerable but slightly uncomfortable. You should feel your heart rate and breathing rate increase slightly. Stay under the cold shower for 30 seconds at first,  then over time work your way up to 2 minutes or so.

This might sound mad to the layperson, but brief walks or jogs with minimal (but legal) clothing is another way to practice cold exposure. When the weather is cold outside, wear summer clothes (t-shirt and shorts will do) and get outside. Start short and brisk, then learn to relax into it and gradually increase your exposure over time.

Once you’ve built your tolerance to cold water and can control your cold shock response, instead of ending showers with a cold blast, why not start with one? Again, start at 30 seconds then increase your time to 2 minutes.

Increase your exposure time by sitting in a cold bath (no ice yet, just cold water) or having a full-on cold shower. Once you feel you can’t control your breathing or shivers, turn up the heat or get out.

This one’s for the pros, progress to ice baths and cryotherapy chambers. These are much more intense as they can drop the ambient temperature to as low as -140 degrees celsius! Cryotherapy has been used for the treatment of migraines, nerve irritation, mood disorders, arthritic pain and certain hair and skin conditions. 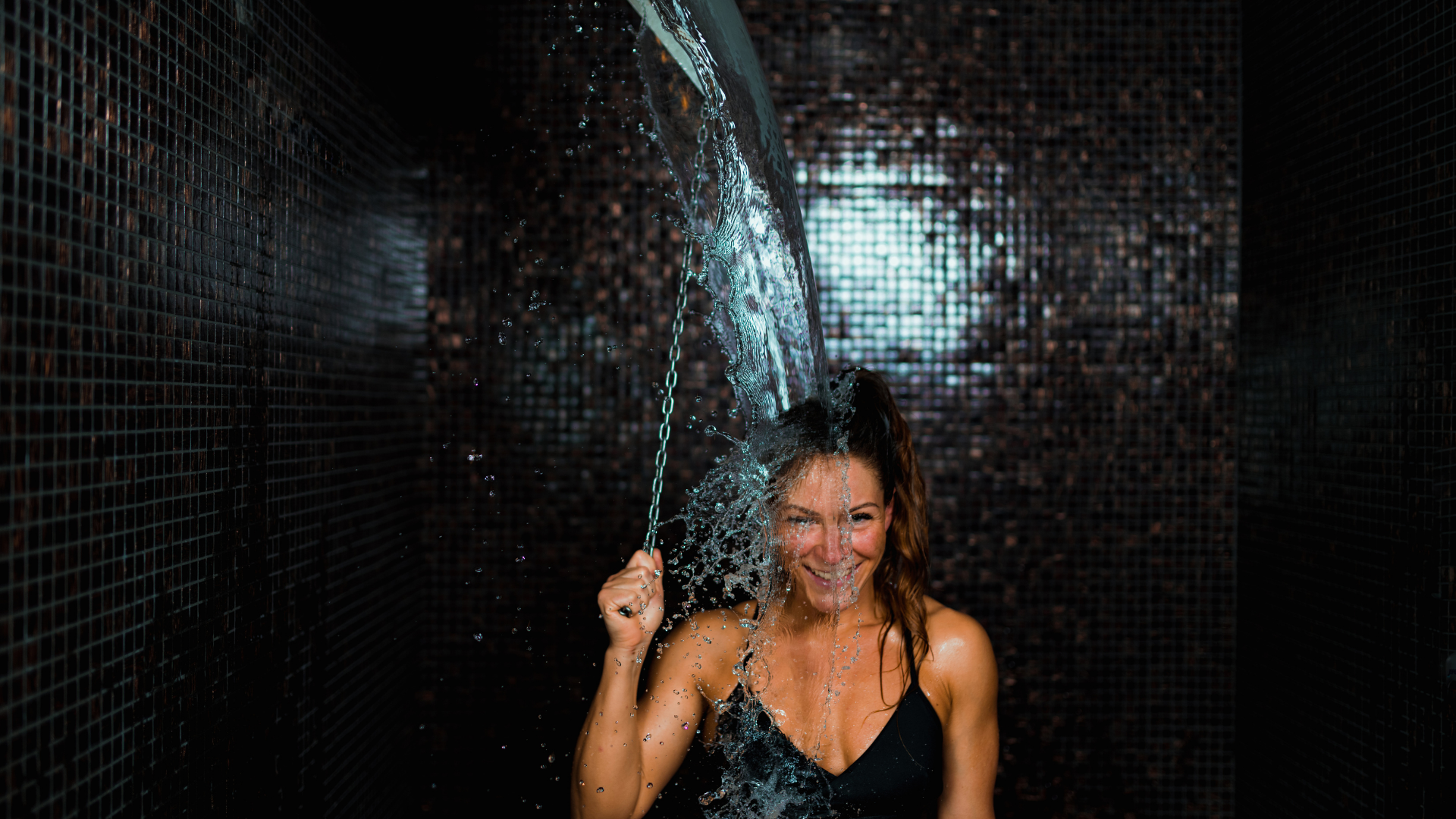