HIIT: What, When and How?

Although there isn’t a single, universal High Intensity Interval Training (HIIT) protocol. Upon a review of the scientific literature, HIIT it can be defined as:

F45, Psycle, Barry’s BootCamp, Sweat it, KXU…the list goes on. You would be living under a rock if you hadn’t noticed the explosion of ”HIIT classes” on the fitness scene! So much so, that the apparent myriad of miraculous benefits HIIT training provides are taken for granted.

Don’t get us wrong, we love a heavy breathing, heart pounding, calorie burning, sweat inducing workout, and the endorphin release that follows! But we also believe that all forms of training are context dependant. There is no such thing as one single “superior” mode of training. All types of training have their pros and cons, the key is dosing exercise to meet the needs of the individual in a way that gains maximum benefits with minimum costs.

When it comes to HIIT, there is a common belief that the more you do and the harder you work, the better, but is there a point of diminishing returns? Does thrashing around for 30 mins or so, with high amounts of perceived exertion actually HIIT training? What are the benefits and draw-backs of HIIT training? Let’s see what science has to say on the topic. Does the science support the hype?

As the name suggests, HIIT consists of repeated bouts of high intensity efforts, towards maximal output, broken up by periods of recovery. If you are performing the bouts at the required high intensity, recovery bouts will be needed and your power output will diminish over time due to the onset of fatigue. This type of training is anaerobic (lactic) by nature (see figure 1.) 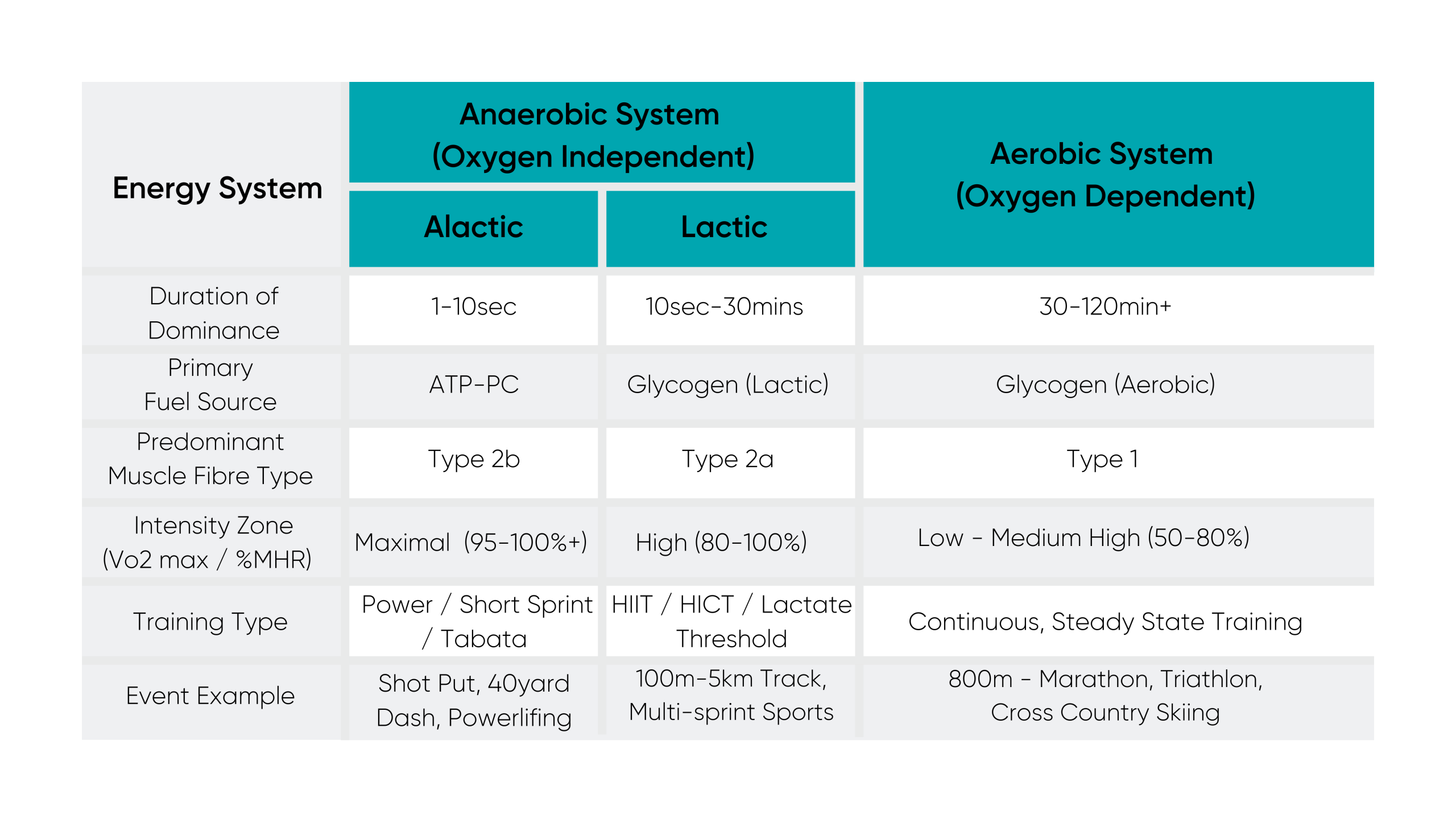 There is no single, absolute standardised method when it comes to HIIT, so intensity, bout duration and recovery durations may vary. For the purpose of this article, we will distinguish a difference between Sprint Interval Training (SIT, i.e. Tabata method) and HIIT. We will define HIIT as 30-120 sec bouts of maximal or near maximal intensity, broken up with rest periods of 2-4 min. (See figure 2.) 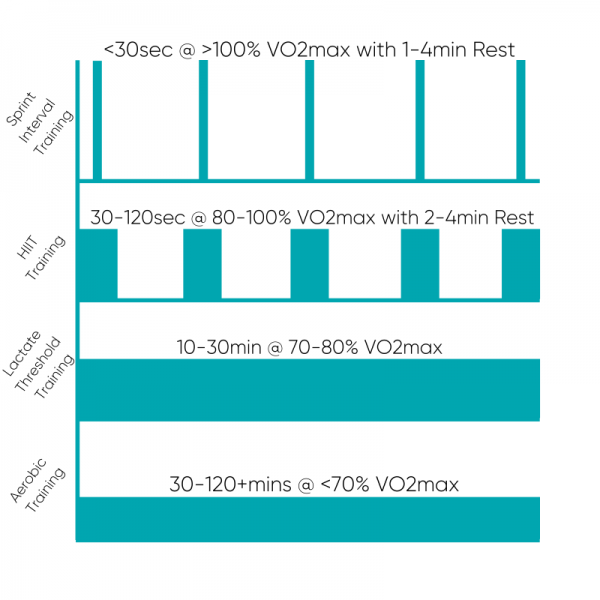 Wingate Protocol – HIIT According to Science

The archetype, go to HIIT protocol in the world of science is known as a Wingate protocol. This ranges between 4-10 sets of 30sec maximal sprints on a spin bike, at high resistance (imagine cycling up a steep hill), interspersed with 2-4min of active recovery (23,9,10).

Having performed Wingate tests at university, makes me feel sick just thinking about it! HIIT is not fun, the rest between bouts is absolutely necessary, and not just for show. It’s concentrated conditioning, hence its proposed potency. If you can repeat the effort after anything less than a minute, is the intensity really high enough?

In short, yes. But as with many things there’s a bit more to it than that. Before discussing the effect of HIIT on aerobic fitness, we need to understand which adaptations / tests are relevant in determining aerobic fitness.

Having said this, it seems that HIIT training can improve maximal cardiac output as much (sometimes more than) LISS. Proposed reasons for this observation is improved left ventricular contractile strength and hypertrophy.

Basically, HIIT helps your heart become stronger and bigger allowing it to pump out more blood per beat where as LISS improves left ventricular filling (preload) and reduces resting blood pressure and HR, for which HIIT evidence is lacking. (For more of a detailed outline regarding the benefits of LISS, click here for a great article by Mike Robertson). 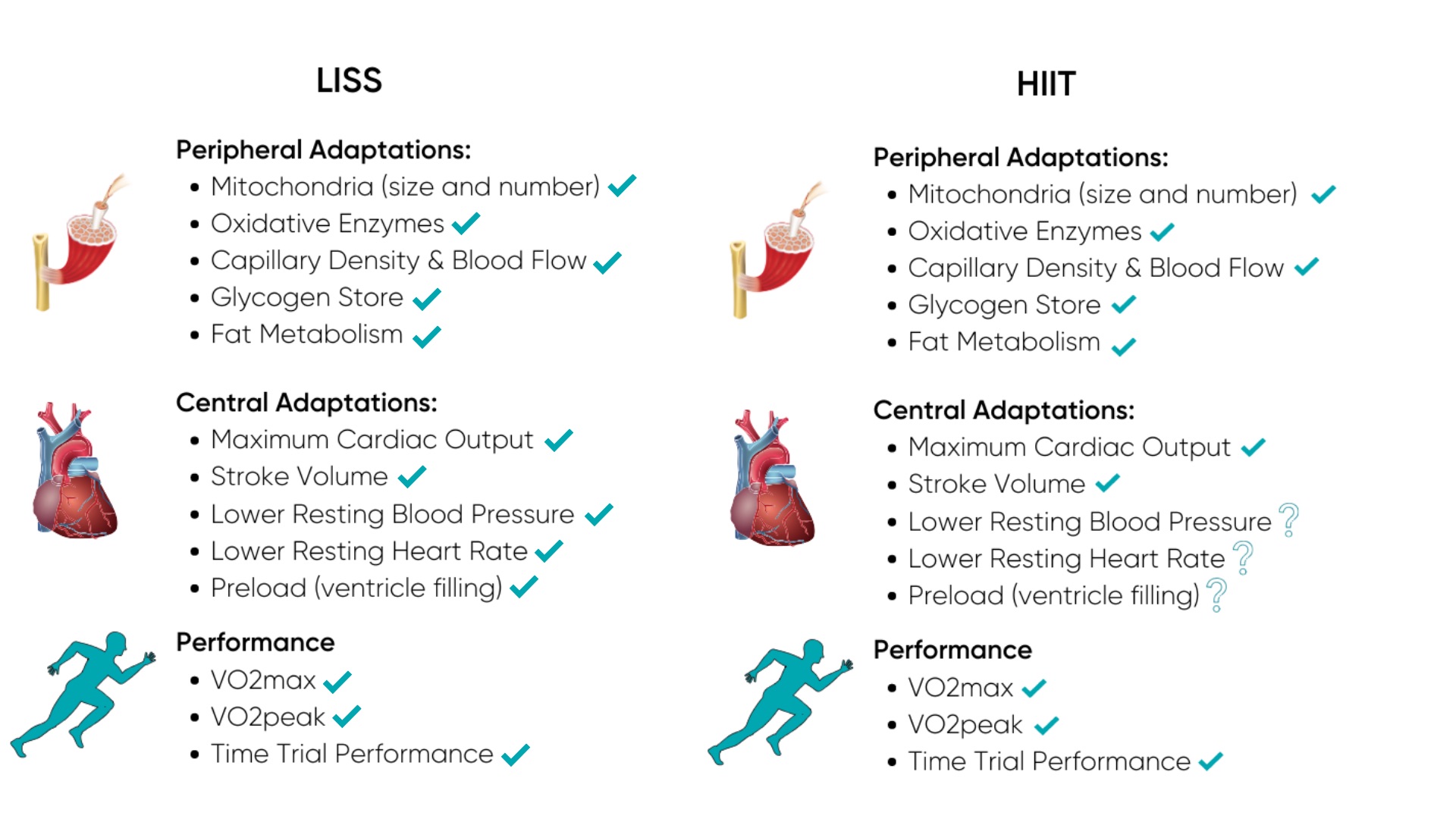 Martin Gibala and Martin Macinnis are the most prolific HIIT scientific researchers in the game and upon a review of the HIIT literature as a whole (20), here’s what they had to say:

“Exercise intensity is a key mediator in mitochondrial adaptations, which could, in part, explain the observed improvements in VO2max scores relative to moderate intensity continuous training. HIIT seems to elicit these adaptations to a higher extent when training volumes are equal, and to a similar extent when HIIT volume is lower. Evidence of other physiological adaptations such as capillary density and cardiac remodelling is emerging, but still equivocal.”

They go on to summarise:

“Interval training is a powerful stimulus to elicit improvements in mitochondrial content and VO2max; however, we know relatively little regarding the influences of exercise intensity, duration, and frequency on other components of the integrative physiological response to interval training”

HIIT is often sold as a workout in which you burn huge amounts of calories, not only during, but long after the session. It is therefore assumed that your metabolic rate will ramp up and you’ll turn into a fat burning furnace! Like most things this isn’t necessarily false but regretfully, this seems to have been grossly over-exaggerated and it’s important to put the actual numbers into context.

This “afterburn effect” is known as Excess Post-Oxygen Consumption (EPOC), which is essentially an energy debt which is built during intense exercise and paid back afterwards. Exercise duration has a positive linear relationship with EPOC, but this only really seems to take effect when you hit a certain intensity, around 60% VO2max (2,3,15).

It has been shown that EPOC is significantly higher following HIIT, compared to volume matched low intensity continuous training, the magnitude of this statistical significance fades into somewhat insignificance when put into a real world context.

Here’s a nicely designed study (21) which illustrates my point:

1) Rested for the entire hour.

2) Rested for 10 minutes and then cycled for 50 minutes continuously at a moderate intensity, or

3) Rested for 40 minutes and then did 10 x 60-second high intensity cycling intervals with 60 seconds’ rest in between.

During those one-hour periods, here’s the average number of calories they burned:

Over the full 24 hours (including the exercise period), here’s approximately how many calories they burned:

So as you can see, you could say that the HIIT protocol was more time-efficient for a similar 24h energy expenditure, but remember the exertion of the 20min HIIT will have to be significantly higher than the 50min LISS.

Be Smart when Training Hard

Exercise modality is a variable which should be taken into consideration when performing HIIT. Skill requirements should be low, as technique will suffer when fatigue kicks in. Far too often people sacrifice technique for the sake of intensity, don’t be this person! To get the most out of this type of training, use a simple exercise modality (ride, run, row etc).

In general, it’s probably not wise to introduce externally loaded resistance training when performing this type of training. Unless you’re technique is very well ingrained, almost second nature. Only then, should you introduce high amounts of fatigue, akin to the best CrossFit athletes.

HIIT can be a potent tool used to improve your fitness and burn calories, and occurs mainly by trading intensity for duration. HIIT seems to elicit similar outcomes in terms of VO2max and calorie expenditure, but requires less time commitment. This trade off, however, is not for the faint hearted, as it requires repeated bouts of near maximal effort. Some researchers note that;

“HIIT requires an extremely high level of subject motivation” and question whether the general population could “practically tolerate the extreme nature of the exercise regimen.”

The highly stressful, taxing nature of HIIT requires smart programming, to minimise any negative aspects of fatigue and maximise time for recovery. For this reason, HIIT is usually performed either by itself as a stand alone session, or at the end of a session, in the form of a “finisher”. Choosing an exercise modality which requires low levels of skill and cognitive processing, allows you to work hard enough without the distraction of technique proficiency.

We feel that a balance can be found between HIIT and LISS. LISS is effective at building an aerobic foundation, to aid recovery and address symptoms of chronic stress (resting / submaximal blood pressure and heart rate). HIIT can be introduced as a time efficient strategy to improve fatigue resistance at high thresholds. Individual preference, goals and responsiveness will dictate their use for calorie expenditure and specific fitness gains.

For most, however, an appropriate balance of the two is usually advised. If you feel you’re suffering from chronic stress, have high blood pressure and increased resting heart rate, than perhaps spend a little more time performing LISS. If you’re in pretty good shape and are looking to get as fit as possible in as little time as possible, then get yourself doing some HIIT. Just be sure, the ‘High Intensity’ aspect is truly high enough.