How To Change Habits For A Healthy Lifestyle 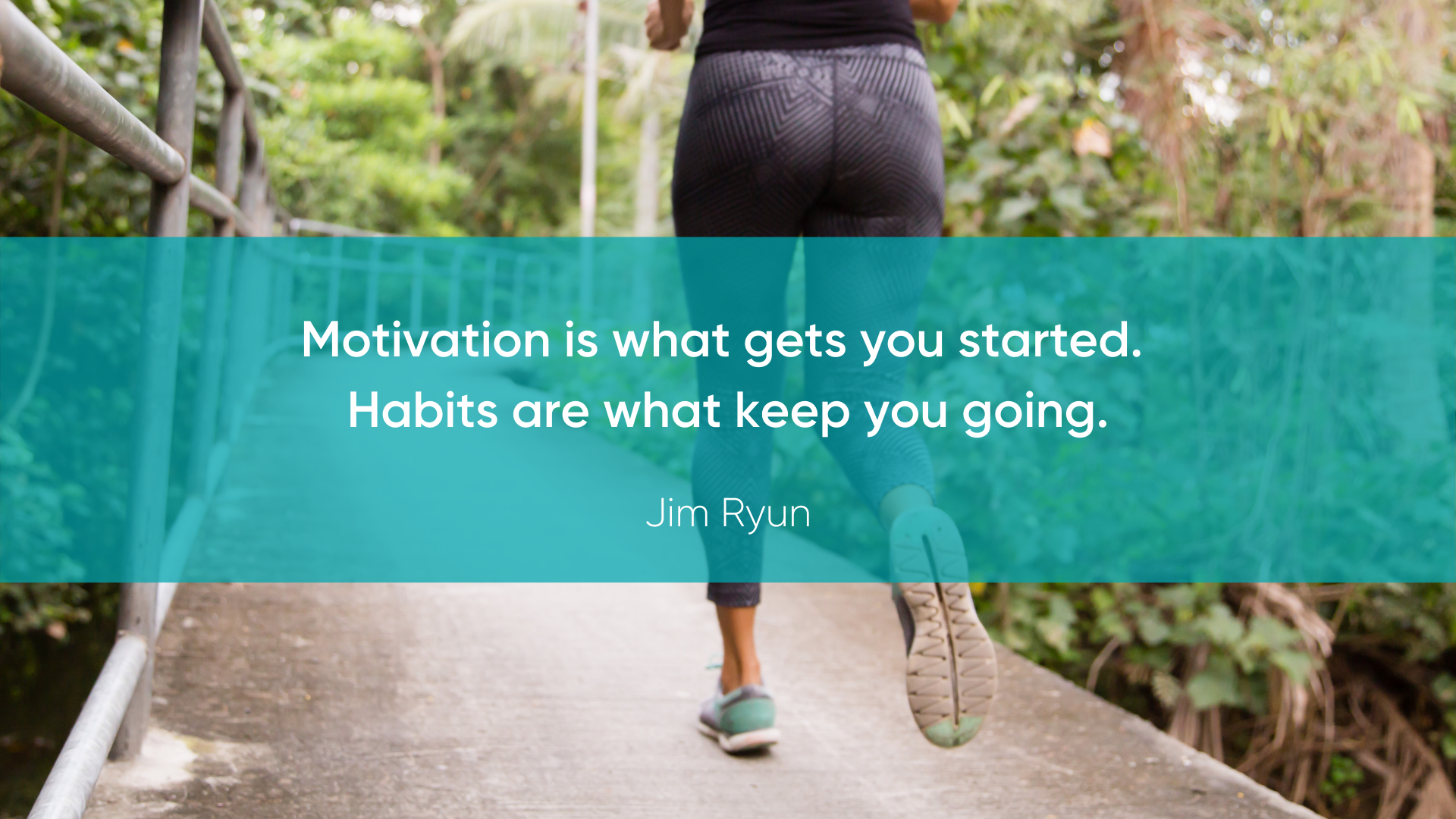 Motivation Is Just the Beginning

What’s the difference between those who exercise regularly and those who don’t? Those who prepare healthy meals in advance compared to those who eat fast food on the go or rely on food delivery services? Are some just born more disciplined and motivated than others? There are definitely some innate personality traits at play, but this only tells half the story. On the surface of it, these people seem like persistently highly motivated individuals, but they’ve just figured out a way to incorporate healthy habits into their everyday life. 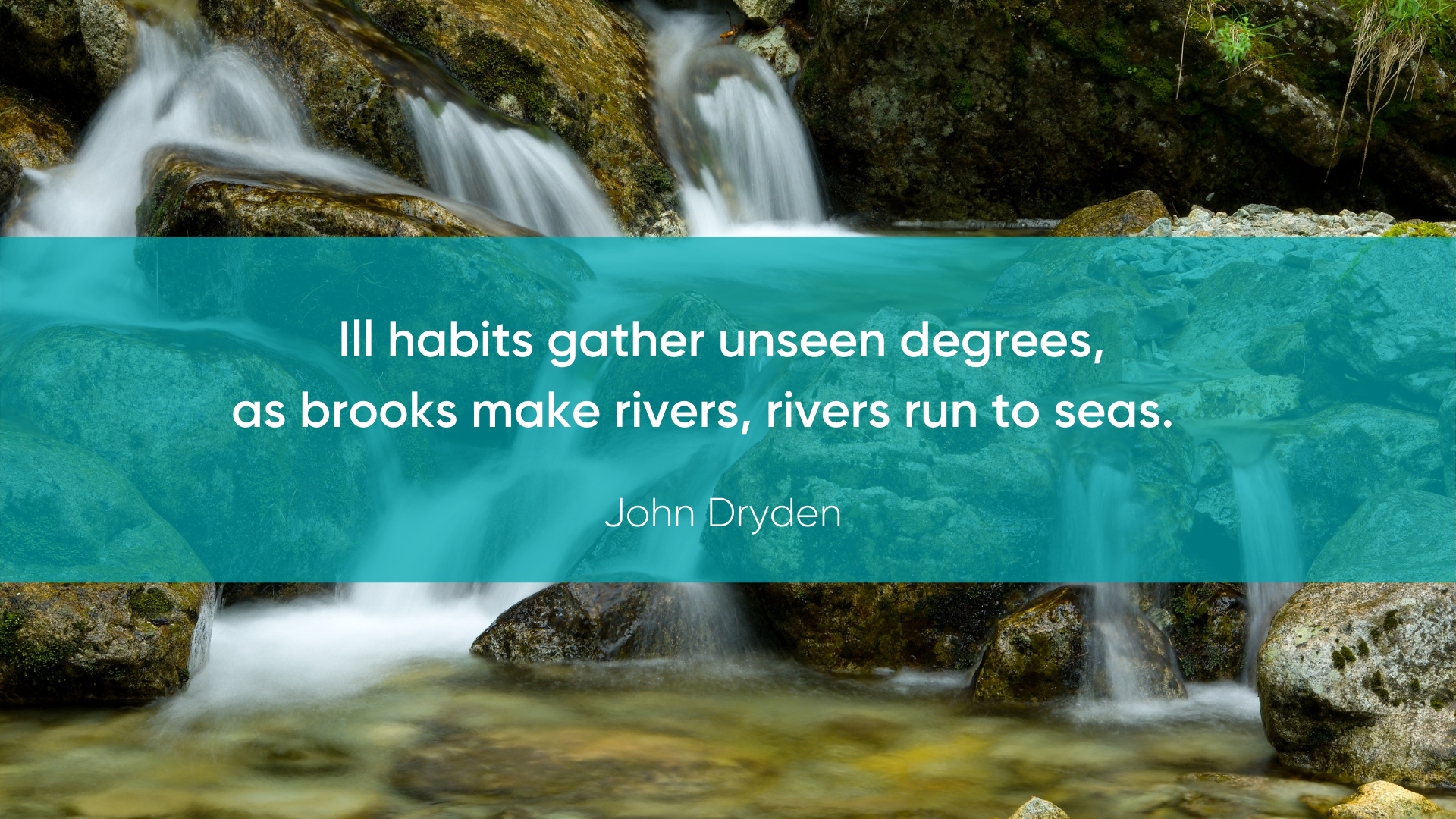 There’s no doubt that deliberately forming new habits requires motivation and effort, especially at the start. If we imagine that every decision we make in our daily lives sends us down a particular path. Our regular habits and routines represent the paths of least resistance. Repeating these is like walking down the same paths time and time again. Eventually, they become so entrenched that we just follow them without even thinking about it.

Changing habits is like forging new paths. This will be met with some resistance at first, but if we repeat them consistently, the new behaviour patterns become more engrained and they can eventually replace the old ones.

When it comes to behaviour change, typical behaviour change consists of telling someone what to change and explaining why this change should be made. Take general nutritional advice, for example, we typically hear advice like “reduce your calorie intake” because “a calorie deficit is required to lose weight”, or “increase your protein intake” because “it helps you feel fuller for longer and improves body composition”.

Whilst these statements are true, they rely on consciously deliberative motivational processes on the part of the person following this advice. According to Daniel Kahneman, psychologist and author of Thinking, Fast and Slow (2 & 10), these are known as “System 2 processes”, which are rational and logical, but also slow, effortful and often indecisive. Behaviour change using these types of processes is typically short-lived and inconsistent because the conscious effort required to sustain them is fleeting (3).

As health and fitness practitioners, we often advise our clients to modify their regular behaviour patterns in line with their goals. In our experience, simply telling someone what to do and why to do it, with no strategy for execution often doesn’t work. For example, a client may successfully implement a new behaviour pattern but this change is often transient and weak in the face of adversity. We’re relying too heavily on temporary bouts of willpower, motivation and discipline which are subject to an individual’s emotional state, as well as physical and psychological energy at any given time. 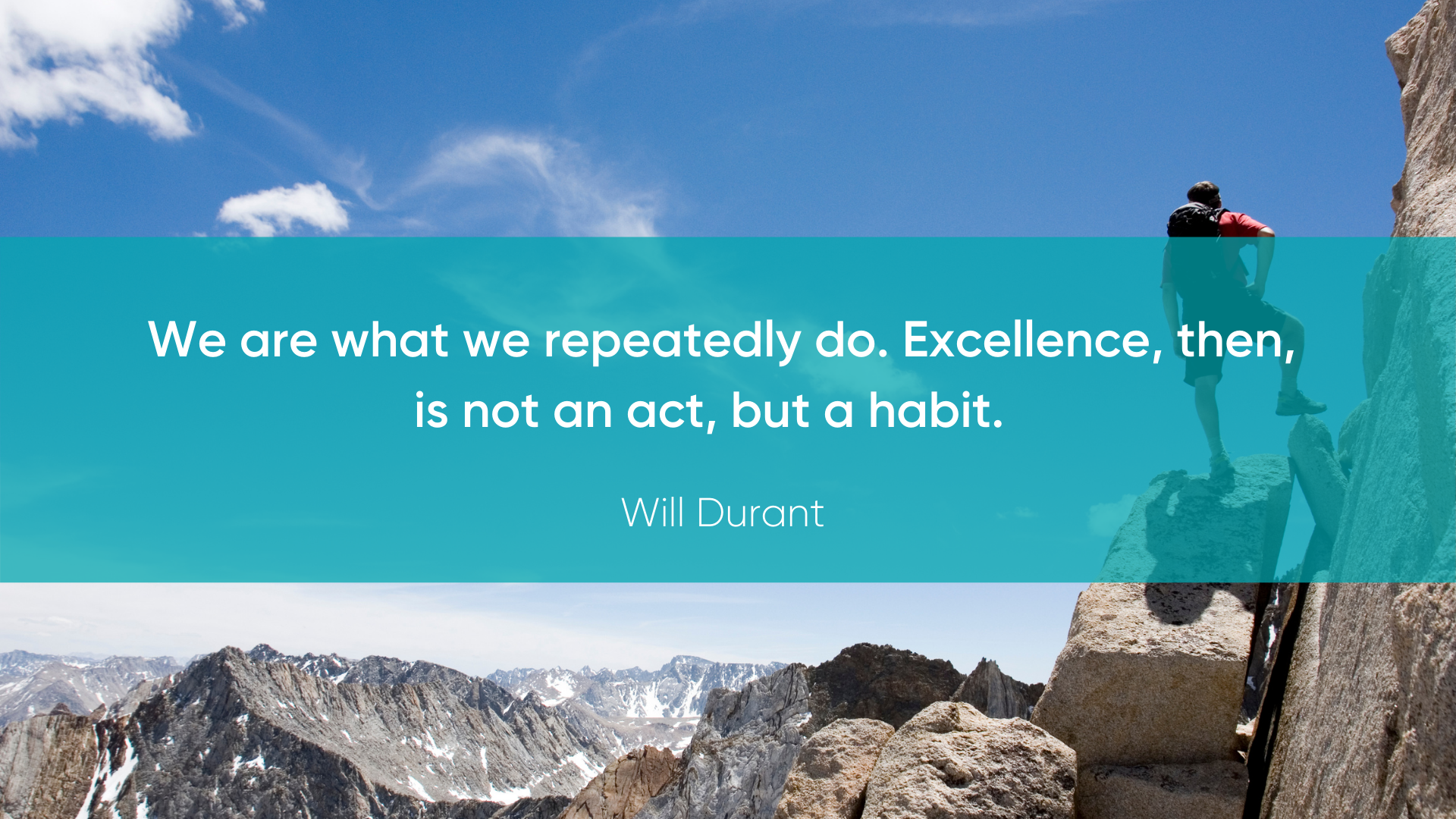 Time for a New Approach

We’ve already mentioned system 2 cognitive processes, which are slow to act and require high amounts of conscious effort. System 1 processes, on the other hand, are fast, automatic and somewhat effortless. In order to create a lasting lifestyle change, we need to transition our desired behaviour patterns from relying on system 2 to system 1 processes. This is achieved through the use of deliberate repetition in response to explicit contextual cues and offers a more valuable and lasting approach to behaviour change.

Consistently repeating a behaviour pattern in response to an identified contextual cue over time leads to a state of automaticity. This means the desired behaviour becomes second nature as if one goes into ‘autopilot mode’ (which is actually where about 95% of our time is spent!) This then is the goal; to perform desired behaviours automatically, with little effort. 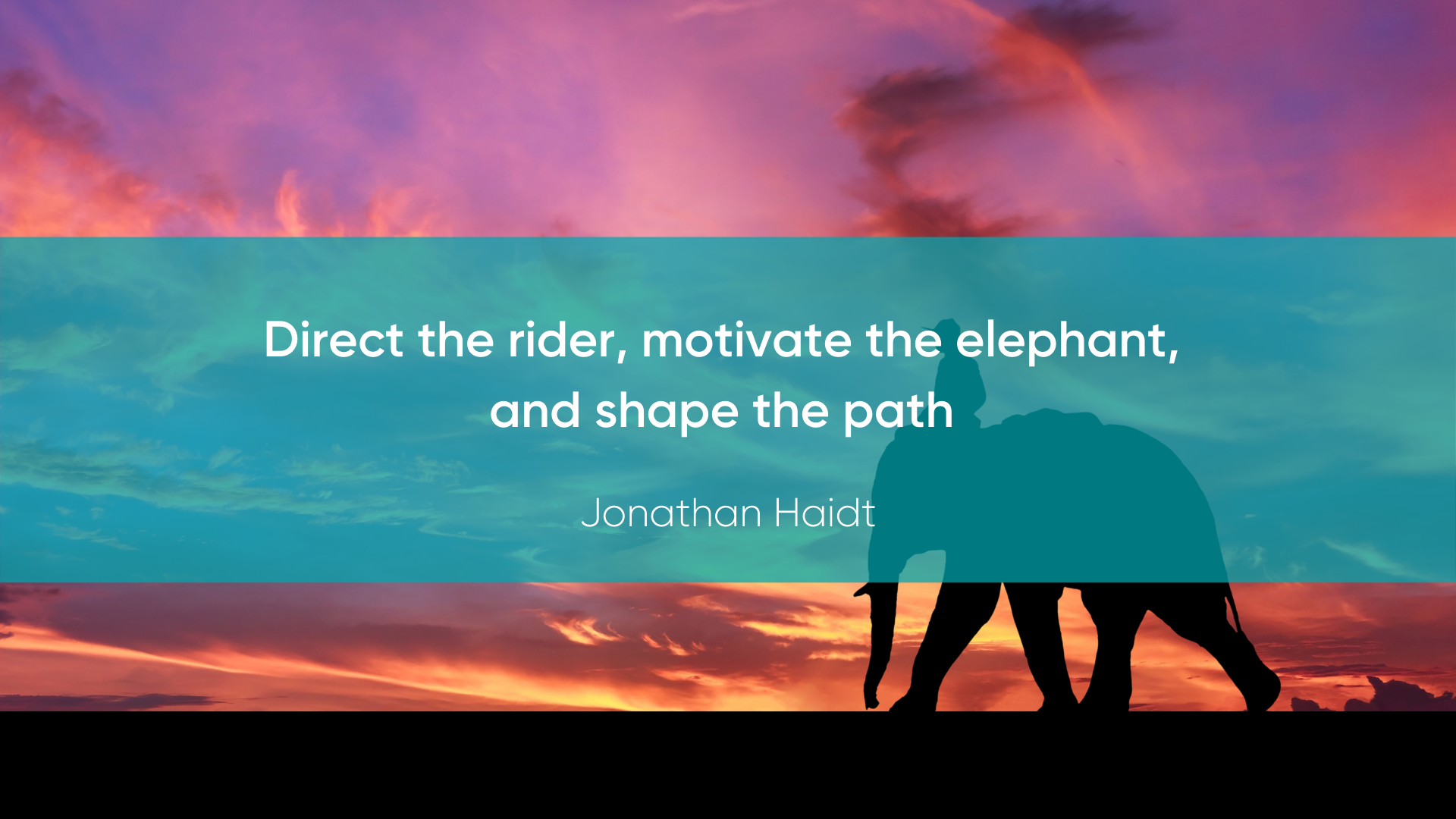 The Elephant, the Rider and the Path

Social psychologist Jonathan Haidt explains the three constants of human behaviour using the analogy of a rider mounted on an elephant walking a path. The rider represents the rational part of the brain, the elephant is the innate, emotional part and the path is the surrounding environment at a given point in time.  The rider holds the reins and seems to be in control when all is going well. But this control is precarious because of the elephant’s size and strength.

Behaviour change is like attempting to make the elephant change direction.  Using system 2 cognitive processes is like trying to steer the elephant off-road using the rider. The rider has to expend a huge amount of effort and energy to do so. To add to the rider’s problems, the elephant is stubborn and doesn’t like going off-road, so will take over and return back to where it feels comfortable. This stubbornness becomes a problem, however, if the path is leading off a cliff!

So, what is to be done? Well, fortunately, the rider can shape the path ahead, which the elephant will happily walk with little resistance. Shaping the path is like manipulating the surrounding environment to create new healthy habits, which rely on automatic system 1 cognitive processes.

Habits are defined as ‘actions that are triggered automatically in response to contextual cues that have been associated with their performance” (4). For example, wiping your feet on the doormat (action) after entering the house from outdoors (contextual cue), or washing your hands (action) after using the toilet (contextual cue). So, the formula for creating habits is fairly simple; repeat a chosen behaviour using a specific contextual cue, until it becomes automatic.

3 Steps to a Healthy Habit

2. Connect this action to a contextual cue

The 3 Phases of Habit Formation

1. Initiation – The habit formation attempt begins; the new behaviour and contextual cues are identified and selected.

2. Learning – The selected behaviour is repeated in the chosen context to strengthen the context-behaviour association. Automaticity starts to develop.

3. Stability – Habit formation has fully developed and its strength has plateaued, it persists over time with minimal effort. 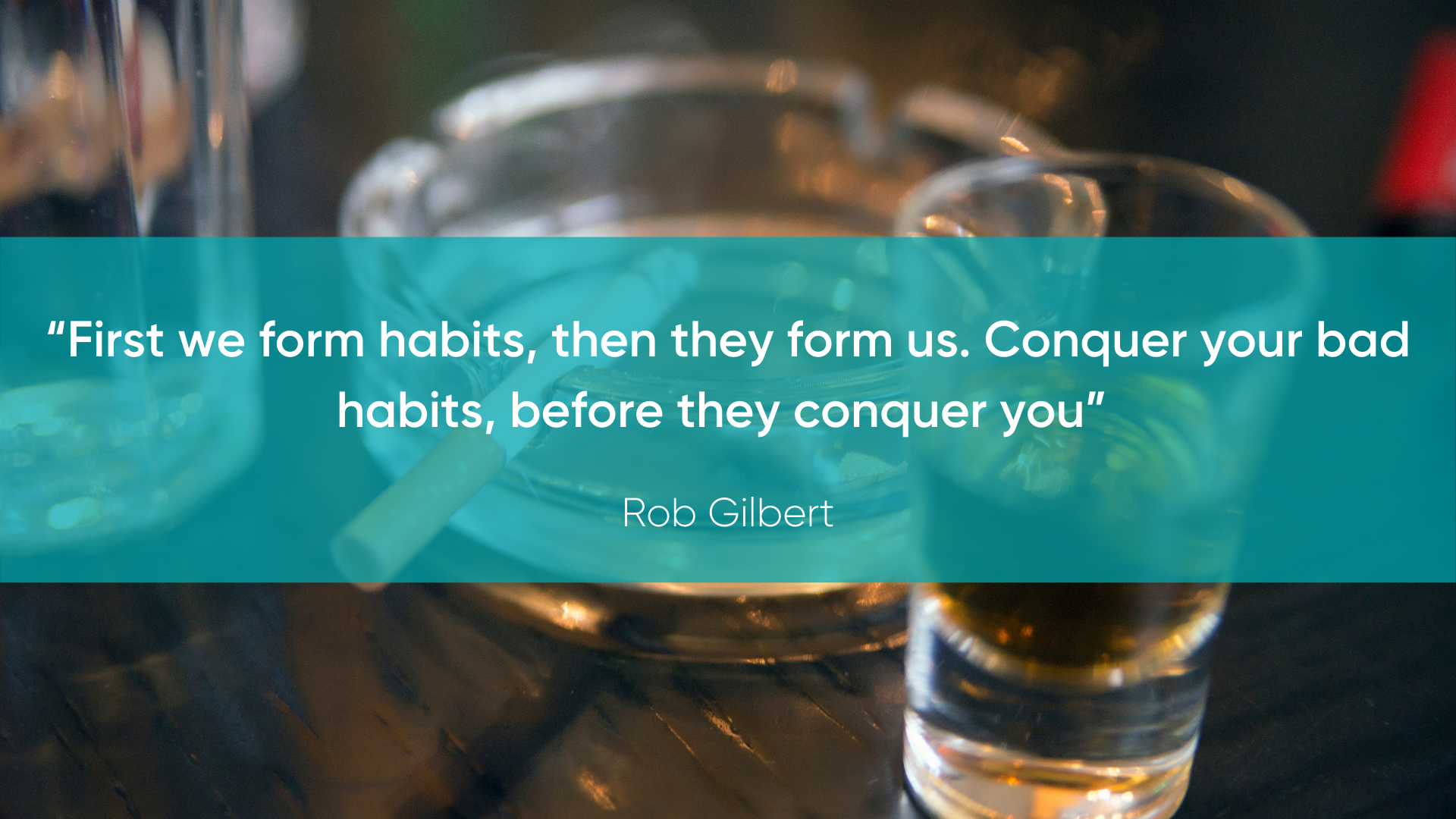 Human beings are creatures of habit, this is both a blessing and a curse. It’s a blessing because it saves on precious brainpower, but a curse because undesirable habits can be formed without full conscious control. Once fully developed, however, they can be very difficult to break, even if they are detrimental to our health and wellbeing, (any alcoholic, smoker or drug addict can testify to this).

Rule #1. Make it invisible – Identify and modify or remove the cues that initiate the undesired action.

Rule #2. Make it unattractive – Make the benefits of avoiding bad habits, or the detriments of maintaining it consciously explicit.

Rule #3. Make it difficult – Reduce the ease of performing your bad habit by increasing the number of steps between you and it.

Rule #4. Make it unsatisfying-  Get an accountability partner, tell them why and how you’re going to break your bad habit and ask them to keep you honest.

Rule #5. Replace the undesired for the desired  – ‘Hijack’ the contextual cue and replace the original undesired action with a desired one.

We think the key take-home here is to keep your initial changes simple, achievable and repeatable. We often underestimate our reluctance to change. Creating ambitious goals is great, but a journey of a thousand miles starts with a single step.

This small changes approach accumulates and compound over time which quickly builds into significant change. For example, a small daily calorie deficit can aid long-term weight management, and small amounts of light physical activity may be the difference between an early heart attack and not (7). Once you’ve implemented a healthy habit into your life, you can use it as an “anchor habit” that other healthy habits can be attached. For example, going to the gym could be accompanied by a healthy post-workout meal. Before you know it you’ve created a whole new healthy routine!

To ensure that your newly adopted healthy habit sticks, they need to be applied to a specific context (time and/or place) and repeated consistently. So, your mission, if you choose to accept it, is to choose one easy healthy action, connect it to a cue at a specific time and place, and see how long it takes this action to become automatic! There’s no time like the present, so get the ball rolling! Good luck and remember to enjoy the process.